E-Cigarette Use May Lead to Tobacco Use

On Monday, the FDA started a ban on selling e-cigarettes to minors. Part of the reason might be new evidence suggesting that e-cigarettes can lead minors to begin smoking combustible cigarettes.

The oral health impact of e-cigarettes is not known. Although we know that some formulations of e-cigarettes contain nicotine, which can have some impact on oral health, and that there are several other chemicals also found in e-cigarettes that may be damaging to oral health. This includes formaldehyde, a known carcinogen that can lead to oral cancer. And we do know that they have a tendency to explode, which can cause serious oral injuries.

But what we haven’t known is whether e-cigarette use leads to the use of tobacco cigarettes and other combustible tobacco products, which have many negative oral health effects, such as the increased risk of gum disease and tooth loss. Now we have a hint: a new study seems to indicate that e-cigarettes are drawing more teens and young adults to use tobacco, putting them at serious risk for oral health complications in the future. 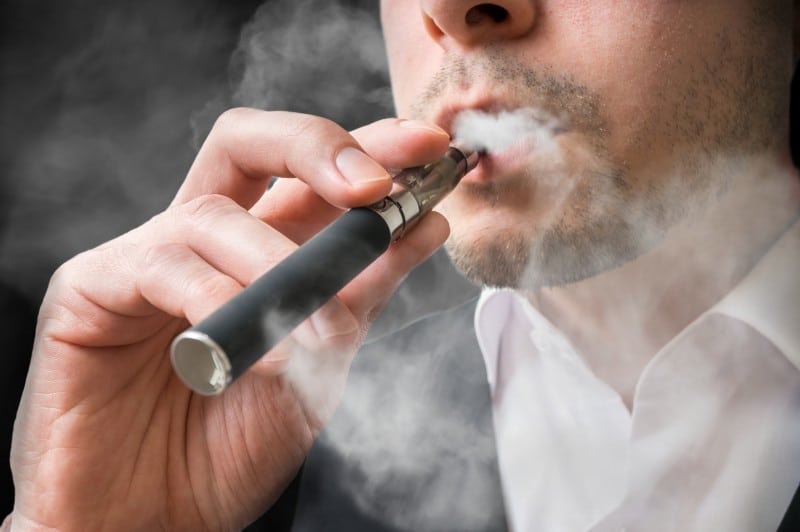 Researchers used data from the Southern California Children’s Health Study (CHS) to lay the groundwork for their conclusions. The Children’s Health Study is a longitudinal cohort study. This means that they selected groups of children (cohorts) and then followed them for a long period of time (the longitude of the study). In the CHS, cohorts were taken from certain classrooms in certain schools and were set to reach the 12th grade in 1995, 1998, 2001, 2004, and 2014. This study looked at data from the 11th and 12th grade years of each cohort, looking at tobacco use in each.

Although this isn’t much of an uptick, it is certainly enough to cause some concern, especially if we can link current e-cigarette use with future use of tobacco cigarettes.

E-Cigarette Use Seems to Lead to Tobacco Use

And that’s exactly what this study was able to do, although the data isn’t very strong.

To follow up on the data from the CHS, researchers sent surveys to participants in the 2014 cohort. They were looking for those who had reported themselves as e-cigarette users but never-smokers and those who were simply never-smokers. They asked these CHS participants whether they had started smoking combustible cigarettes now that they were over 18 and legally able to purchase them.

If you are currently a smoker, the time to quit is now. Cigarette smoking can double your risk of tooth loss, and it can also significantly increase your risk of serious gum disease. Gum disease causes a host of other health problems, and it can make it harder to replace missing teeth with dental implants. The reason to quit now is that it can take decades for your oral health to become similar to that of a never-smoker.

If you are looking for a Rochester, NY dentist who understands the links between your overall health and your oral health, then please call (585) 244-3337 today for an appointment at Contemporary Dentistry.